Following reports and photos received this week of the Obab Lion Pride that roams the central Western side of the Palmwag concession and the Skeleton Coast around the Unyabriver delta, including photos of an emaciated, possibly dying male Lion, we reflect on the status of the Desert adapted Lions. Another report received reflects on another (the fifth since October 2021 in this area only) poisoned Lion (collared adult female) killed by lacing a Zebra carcass with poison.
The drought in the Kunene region where these Lions roam is now in its tenth year and only very mild relief had been experienced in certain small areas where little and sporadic rain had fallen last year. Most of this outside of the Desert Lions’ home ranges so no benefits had been had by them.
During our last visit Springbok lambs had been observed and even a few Oryx calves but the latter could literally be counted on one hand and the absence of prey like Zebra and Oryx was and still is shocking. According to the researcher Dr Philip Stander, Desert Adapted Lions’ diet consist of only one percent of Springbok, given the latter’s speed and agility and affinity to open plains.
Given the trend on the mortality of the Desert Lions over the past few years and the stagnation in reproduction (stress and poor conditions and increased cub mortality) it is a sad fact that the numbers have steadily dwindled even further. Factors like starvation, retaliatory killings and poisoning by farmers, gender bias and disrupted dynamics (absence of males), removal/translocation of starving Lions (a total of 19 Lions since 2018- 5 to Erongo Mountain area that just “vanished” and 14 to Naankuse, (all healthy and accounted for), including the Huab Pride in 2021) and Lions accused of Livestock predation (Ugab Lions 2018), sterility (in some cases possibly due to in-breeding), culling of “problem Lions” etc. have had a debilitating, destructive effect on the Desert Lion population.
In the light of the expanding Desertification, clearly evident from West to East, and the “shifting” of the rainfall expectations and isohyets Eastwards, we are less than optimistic about the future for these, and other, Desert dwellers. We maintain that, through timeous intervention, the damage can be arrested and even overturned to an extent. More Gazetted Protected Areas for Wildlife and proper management of Human Wildlife Conflict are two key factors needed to turn things around. Intervention with the help of a sanctuary like Naankuse/Tembila in the short/medium term will be a valuable tool for recovery in this instance.
Interestingly, although unsurprisingly logically,  Human Lion Conflict frequency clearly diminished as Livestock numbers drastically decreased (around 70% less Cattle) due to starvation as a result of the drought. This resulted in less encroachment pressure.  A Contributory factor to this was of course also the Lion population decreasing by around fifty percent (in our estimation) over this period. 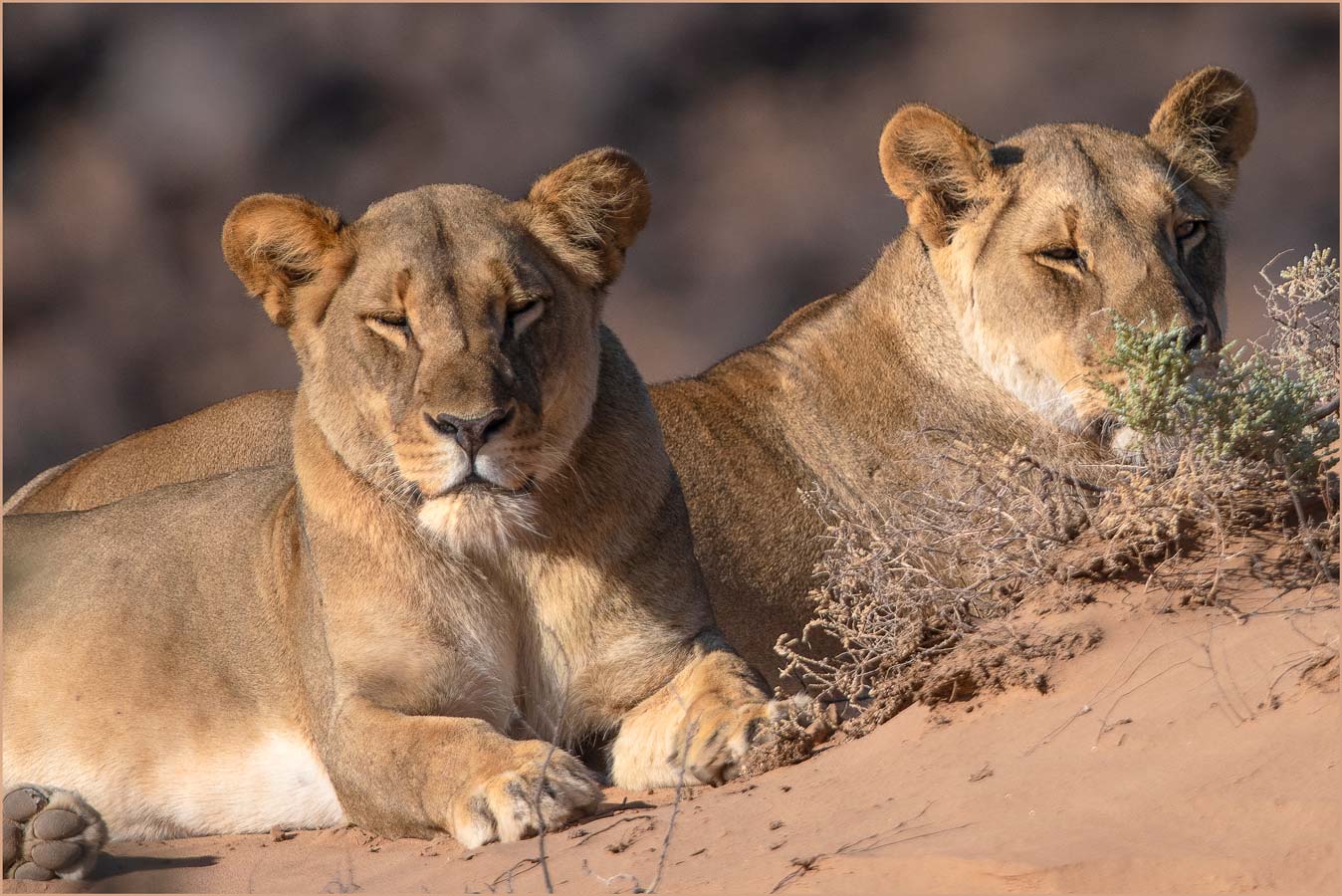 No reports or information is forthcoming from the Desert Lion Conservation Trust’s Dr Philip Stander and the last publication was done on 11th July 2021. The NGO has maintained silence since that date and it is unknown as to why. As an NGO it has certain obligations and accountability to its supporters and funders in line with its published policy, mission and vision. Unsubstantiated rumours of the researcher being unwell is the only info available. If this is indeed so, we wish him a speedy recovery and return to what he loves to do most. We regret to have heard that the very able Dr Hartmann, the Veterinary Surgeon of the Ministry of Environment, Forestry and Tourism, who have been collaring Desert Lions in Dr Stander’s absence, had to have Heart surgery and we wish him a speedy recovery and return to what he loves most to do. In the meantime, we are happy to learn that Dr Maaike de Schepper, contracted by Naankuse, who did a sterling job with the translocation of the starving Huab Lions last year, is now looking after the darting and collaring of the Desert Adapted Lions. How she managed to pull those skeletal Lions through is beyond us!
Judging by the news on Instagram by the Lion Rangers active in the Ombonde area they, under the guidance of Dr John Heydinger and Mr Muzuma are doing great work and we look forward to the positive results of their work as a corridor between the Etosha National Park and the Kunene region’s Desert Dwelling Lions is of utmost importance for the survival and genetic diversity of the Desert Lions. We wish them well and would encourage all to support their work. The Namibian Lion Trust operating “between the Desert Lions and the Etosha Lions” do great work and one shudders to think how many Lions would, in their absence, have been poisoned in their area of operation. The Ministry of Environment, Forestry and Tourism have also stepped up their game and we are hopeful and positive that all will now collaborate in the interest of the conservation of the Desert Adapted Lions and Conservancy communities.
All projections, however, in the light of the above are not good and decisive and focussed action will be necessary to change things and tilt the scale for the Desert Adapted Lions if they are to survive….